Jacques teaches, touches to the end.

When I started this beat four years ago, the first two people Kevin Acee introduced me to were Luis Castillo and Jacques Cesaire.

“Two of the best people around,” he said.

At that time, the place now known as “The Zoo” — (the area in the locker room inhabited by the defensive line) — looked a little different. There was no Corey Liuget, no Kendall Reyes. Vaughn Martin had just been drafted that year. Ryon Bingham and Alfonso Boone had lockers.

That was my first year on the beat, my first year covering a professional football team, and, as I call it, my rookie season. It was a fun year but also a tough year. I had to learn as I went. I had to find my identity in that locker room. I had to build relationships and prove I belonged. I did a lot of things right, but I also experienced growing pains.

Have you ever seen Jacques smile? It’s like a freakin’ Christmas tree just lit up. It’s contagious. It’s genuine.

And it was a constant. 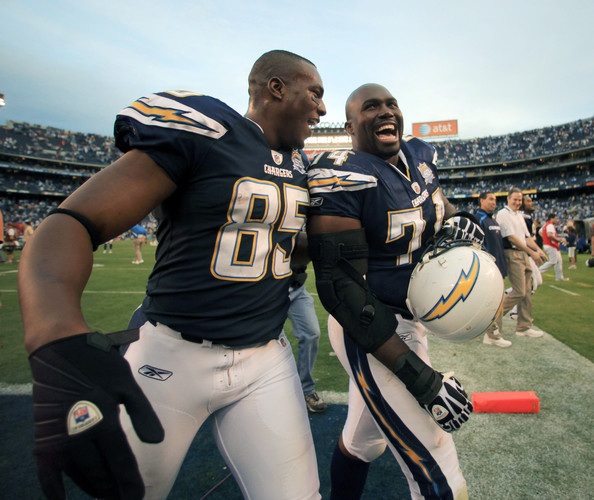 When you’re a woman in a man’s world, you often get tested. That year, I was tested a lot. How thick was my skin? How would I hold up to some teasing? How would I maintain professionalism? Many times, when I walked into the defensive line area — which I coined “The Lair” — I’d get ribbed. Jacques would join in, but then he’d always know when enough was enough. He never let it cross the line. He stopped, or called it off, and the other guys followed suit.

He was, as his teammates call him, their “spiritual leader.” When he spoke, they listened.

Jacques became a guy I interviewed and chatted with a lot. He was always patient, always generous with his time. He was hilarious, but also serious. I got to know his wife, Jill, and their daughter. Then their son, when he was born. Not well. Not close. But enough to share pleasantries with whenever I saw the family at events and games.

Fast forward to last season. I’m working for NBC doing my “Overtime With Annie” segments, where I take players off the field to show their personalities, and I get this idea to surprise a deserving family with a “D-Line Christmas” in December. Okay. It’s tough enough to get ONE player off the field … imagine getting an entire line to agree to a place and time. During the season, players are pulled in so many different directions, and asking them to do MORE than that is asking a lot. But I approached the D-Line, brought it up, and Jacques looked at me with all the other guys around and said, “We’ll do it. Don’t worry about how. We’ll get it done.”

It wasn’t easy, but he found time to meet me and give me money to shop for all the presents. And when the day came to surprise the family, every … member … of … the … D-Line … was … there.

Those kids had a day they will never forget.

I credit that to the whole line for following through, but I know how much of that was because of Jacques.

He is such an identity of that D-Line, such a steadfast part of their cohesiveness. He’s the one who, knowing they were next in line to take his place, “adopted” Vaughn Martin, Corey Liuget and Kendall Reyes, showed them the ropes, invited them to his house for dinner, made them feel comfortable and embraced their role as teammates.

He’s the one who paid for sandwiches to be delivered to the homeless each week and passed out turkeys to needy families at Thanksgiving.

I’m not saying he’s the only guy in that locker room that is kind and generous. He’s not. There are so many players who do things for people in the community that you, the fan, will never know about. Make no mistake. But Jacques, like I said, just had an unselfishness to him, and a personality that was so authentic. It was impossible to not like the guy.

I’m selfishly sad that more young players won’t learn from him, how he treated people, how he treated the media and fans. He had an understanding of all the moving parts that go along with professional football.

I wish Jacques the best of luck. I’ll miss him. I’m sure this won’t be the last we see of him. He’s built a nine-year career with the Chargers out of basically nothing.

And he’s done so with a smile that will be sorely missed around that locker room.