I spent the weekend in Texas, at LaDainian Tomlinson’s 3-day football clinic, on the campus of TCU.

Here’s the thing: For the most part, I shoot my own stories. Sometimes I get a cameraman, but for this story (as is the case pretty much anytime I’m traveling) I did not. Now, I’m not complaining — being a “one-woman-band” has afforded me a lot of opportunities and is really the foundation of who I am as a reporter — butttttttt … sometimes it’s harder than others. I mean, think about it. I’m out shooting in humid, stuffy Texas heat and pretty much drenched in sweat, running around the football fields, trying to get good shots, but in five minutes I’ve got to go on-camera and interview a superstar.

Wipe off my forehead, throw on some powder, hope I don’t smell, guzzle a little water and smile, smile, smile … all while sweat drips down my back.

That’s how I roll.

Okay, onto the superstar.

Kevin Acee and I decided to go to Texas long before LT decided to retire. We knew he was in a contemplative state about the game, and we knew he started a football academy that he was very involved with, and both of those factors prompted us to book the flight to Fort Worth. But the week of the trip, LT gave up the NFL and went into history books with the Chargers. That sort of changed our angle, but not really. We still wanted to go and see what his mindset was like post-retirement and what this whole LT-Academy was about … so off we went to Texas.

I mean, it’s LaDainian Tomlinson, a prolific running back who defined the Chargers organization for nearly a decade. Given the chance to go, you go.

It was awesome to see LT in this kind of environment — coaching, mentoring, advising — and every once in a while breaking out in a little cut or run against the athletes. 🙂 Kevin and I chatted with LT throughout the weekend and talked to him for about an hour on Saturday. He was relaxed, open, super involved with the kids. He seemed very, very comfortable with retirement.

This example is trite, but it’s all I know, so I’m going to go with it. Most of you know dance was/is a huge part of my life growing up and really was my career path for nearly 12 years. I worked a full-time “real job” — you know, with timecards and benefits and stuff — and then I’d go teach for five or six hours every night. It was my passion. That was after dancing all throughout my childhood, teen and college years.

I loved it. I thrived on it.

When I chose to stop teaching to pursue my path as a sports reporter, I felt the most immense hole in my life … even though I knew it was the right decision. Dance had — and to some extent, does — define me. And when it stopped, I missed the kids, the creativity, the music, the costumes, the culture … “Dance Moms” is real, yo! It’s no joke! And you get used to that, to being a “studio brat” and having that family.

So, I can’t imagine how LT might feel come September.

What impresses me about LT is that he has a plan. He’s gotten advice from former teammates; he’s read books and forced himself to stay on a schedule (get his son ready for school, take him to school, come home, run, etc) … He wants to keep busy and “not sit on the couch,” he told me. But he also admitted he knows he’s going to have rough days.

And here’s some pictures from the trip … enjoy! 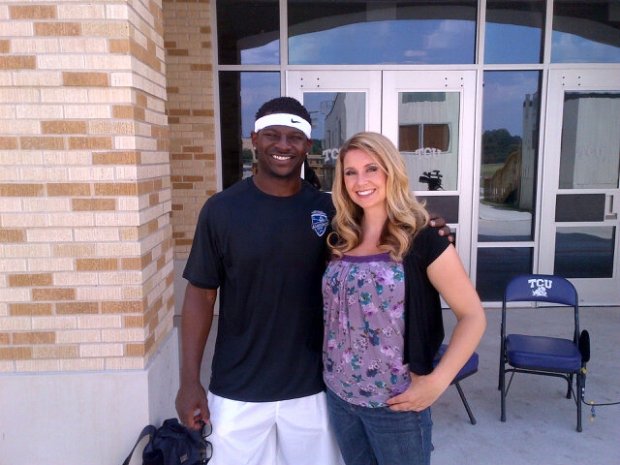 The hotel we were staying at had one of those waffle-makers, you know, where you pour the batter in and make your own. Except this is Texas! They don’t have ordinary round waffles! No sirree! They have Texas shaped waffle-makers. Kevin made one every morning … And I’d rip off the panhandle. 😉 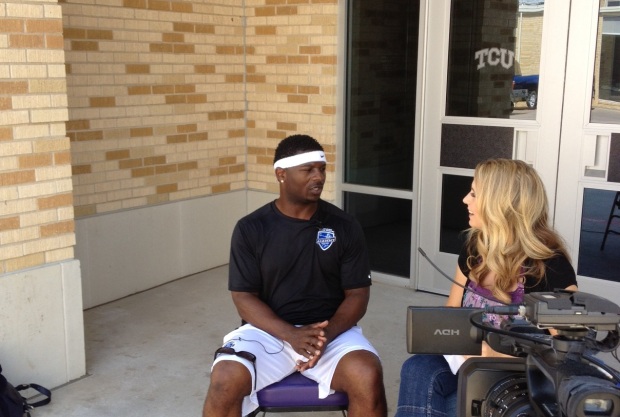