Some thoughts on strength.

The Chargers fired their strength and conditioning staff today. After an influx of muscle injuries the last few years, this firing seemed inevitable, although it was reported that Mike McCoy simply “had his guy” that he wanted to bring in, and the firing of the old staff was the result of McCoy pulling rank (as he should … I mean, he’s the head coach).

Soooo … that prompted a lot of Twitter fire (with many rejoicing that the change had finally been made) … and I said this: 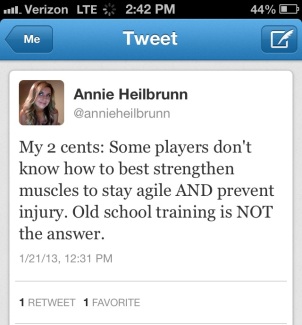 I hear a lot that NFL players should just KNOW how to keep their bodies in the best shape possible because they are “elite players, at a professional level” … Yes. They are. But keep this in mind: These are the guys who were the top dogs in college. They were the business. Most of them just had this raw talent, and they were the best of their class growing up — the most athletic, the most versatile, the most productive. They didn’t “train” … they didn’t need to train. They were the kings.

Enter the NFL … where everyone is a king.

Now you have these players, who were always top-notch at their respective school because of their God-given talent (again — MOST. Not ALL.) … And they don’t know what to do, now that they’re surrounded by all kinds of players who are just as good — (if not better) than them.

They are getting older. They are training harder. Now, this is a job. If they aren’t good enough, they lose the job. If they get hurt, they may lose the career. They’re trying to one-up the guy next to them. Each player is looking for the best way to beat the other player … Some go the method of hard work, some go the method of quick fix, some look to veterans, and some are paralyzed with indecision, or, sometimes, lack of motivation. It just depends.

My point is, now they have to figure out how to train. How to eat. How to have longevity in this league. How to sustain injuries and come back fiercer. They didn’t have to do this before.

So when someone says “they should just know how” … Why? Why should they just know how? This is new territory.

Plus, each player is different. What works for one player isn’t necessarily going to work for another. Some players choose to get a personal trainer … others just work out at the facility … others team up and create a plan … and some just go at it solo.

Most players that have found the *right* trainer make leaps and bounds from one year to the next.

Okay — that was my tangent. Now consider the strength and conditioning staff of the team:

Being a strength and conditioning coach in the NFL is tough. Not only do you have 10 position groups to worry about, you have a variety of bodies, plenty of baggage as far as injuries go, different pain thresholds and different needs. Also, under the new CBA, coaches can only work with players for a certain number of hours each season.

The game has changed. Football has become less about brute strength and more about technique, athleticism and finesse. Players need to condition themselves to handle the wear-and-tear of the game, while continuing to improve and one-up their skill level. Every year, a new crop of athletes is drafted that are faster, stronger, more agile. If a player (or a coach) isn’t continually trying new techniques to GET THE MOST OUT OF HIS PERFORMANCE, a player is already regressing.

Doing the same thing, over and over, will only get you so far.

That’s not to say that someone should be trying yoga one week, boxing the next, walking on fire the third. That’s simply to say the best program (that players tell me, anyways) is one that is based in a good foundation (strength training that keeps them fast, agile, fluid and flexible) as well as a combination of exercises to challenge their body and supplement their performance. It’s not about how heavy you can lift. Every single thing a player does when he trains should show itself on the field. There should be a method to the madness.

More and more teams are bringing in coaches (either temporarily or long-term) that specialize in something — like yoga or martial arts — to help certain guys get an advantage.

I’ve had several players tell me they aren’t sure what to do when it comes to training, or that they simply train themselves, or that former strength and conditioning coaches aren’t hip to the changing game, so they focus on old techniques that may end up causing muscle strains.

Make no mistake — players are paid professionals. If they don’t know something, it’s on them to figure it out or to get their bodies to peak performance. But sometimes, the tools a team provides are sub-par. We’ll see how how the new staff shapes up.

So, it finally happened.

Both are 40. Both are assuming their respective positions for the first time. 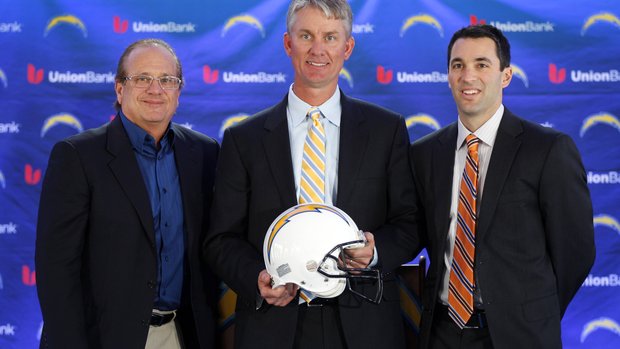 It’s definitely a new direction for the Chargers, a deviation from AJ Smith and Norv Turner. It’s a “youth movement” — a lot of emphasis being placed on energy and enthusiasm … two words that wouldn’t necessarily come to mind when talking about the old regime.

Still, there are similarities. Smith wanted to draft and develop … and did, until he seemed to lose the magic touch. Like Turner, McCoy is mostly even-keeled on the field and keeps his emotions in check. If you’re looking for histrionics, you won’t find them in the new Chargers coach.

That’s kinda where the similarities end. 😉

Telesco and McCoy are very engaging, friendly and likable. They welcome questions and they patiently chat with media. Sure, the honeymoon will end soon and both will pull back. But even when they do, there will still be a change in culture.

I like both hires. I’m not a prophet. I can’t see into a crystal ball and tell you all it will work out. But, both Telesco and McCoy seem ambitious, motivated,  intelligent … and perhaps most importantly, on the same page as to how the organization will run.

Here are some takeaways from yours truly:

Family is huge to me. I wanted to go somewhere that you can welcome your family with open arms. Come in here and understand that we all work our tails off. We work a lot of hours as football coaches. Players work extremely hard but understand that there are certain family values also.

And Dean Spanos said this:

We want to create a family feeling around here and maybe that’s been gone the last few years. So you lose it every once in a while and you forget what it was all about and it’s sort of refreshing to think that we’re going to get back to that.

You have to do what your players do best. I’m a firm believer in that. Every play on paper is a touchdown. Every run is a 10-yard gain, if not more. We are going to analyze our football team from this point on and figure out through OTAs, mini camps, training camp, what do our players do best and let them play. I’ve got no problem calling the same play 10 times in a game. If they can’t stop it and Philip can pick them apart running that play, we will run that play time and time again. I think that is our job as a football coach, is to find out what our players do best. The players are going to give us a lot of input. We don’t have all the answers as coaches.

He was one of the most polished first-time head coaching candidates I’ve ever seen … Some people come into an interview prepared for the interview. But he was prepared for the job … He’s a leader of men. He was a quarterback in college. You could kind of see the toughness in his eyes when he talked to us. He’s a teacher who can communicate with all different backgrounds of players and all different levels of experience. He’s a motivator as a coach who can get guys to play their best at critical times. Those are the kinds of things that we were looking for and it just started to come out naturally.

One of the things I liked about McCoy (and I’ll be curious to see how he executes this) is his attention to detail. He said he and Telesco will devise a plan — everything from the training camp schedule, to when they will leave for a road trip, to what the players will eat. I like that. I know it seems like every player should be able to make the decision of what to eat, or how to train, or when to sleep, but, uh … that’s not the case. Some guys can … But some guys can’t. They have never had to. They leave college (where they were the best on their team and got away with bad habits) and they get into the NFL and they just don’t know how to take their LIFESTYLE to the next level. So, I’m hoping McCoy focuses on that. I think details make all the difference.

The 2012 Chargers Season: A Trip Down Memory Lane.

I’m a little late to the party on this, but hey, I have the excuse of a new general manager and head coach for the Chargers. 😉 Still … here are some memories from 2012:

Preseason. Takeo Spikes and I got some golf in … And we talked about the upcoming season. He had high hopes. 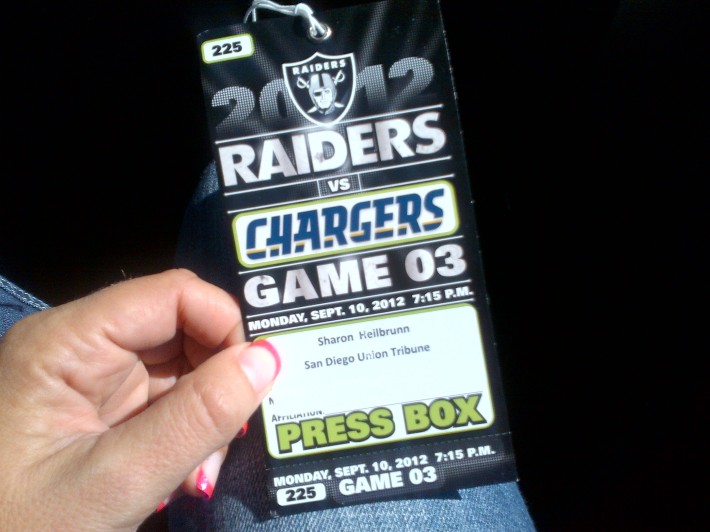 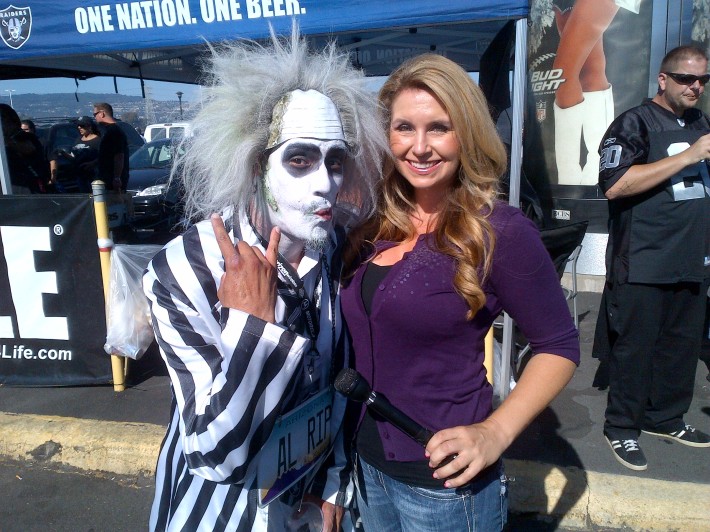 First game of the season. RAIDERS! Chargers win, 22-14. All was bright and shiny.

New Orleans. I still remember how many Chargers fans were in the French Quarter, and how fun it was at this game … Until the fourth quarter, when San Diego lost the lead and lost the game. It was a turning point of sorts, but none that could prepare us for …

This. This was the halftime photo from the Broncos game. Monday Night Football. Chargers up 24-0 at halftime. Note the smiles. At this point, San Diego had this one locked up. That loss will go down in history with me. It was so tangible — You could just feel the energy shift as soon as Peyton and Company hit the field for the second half. 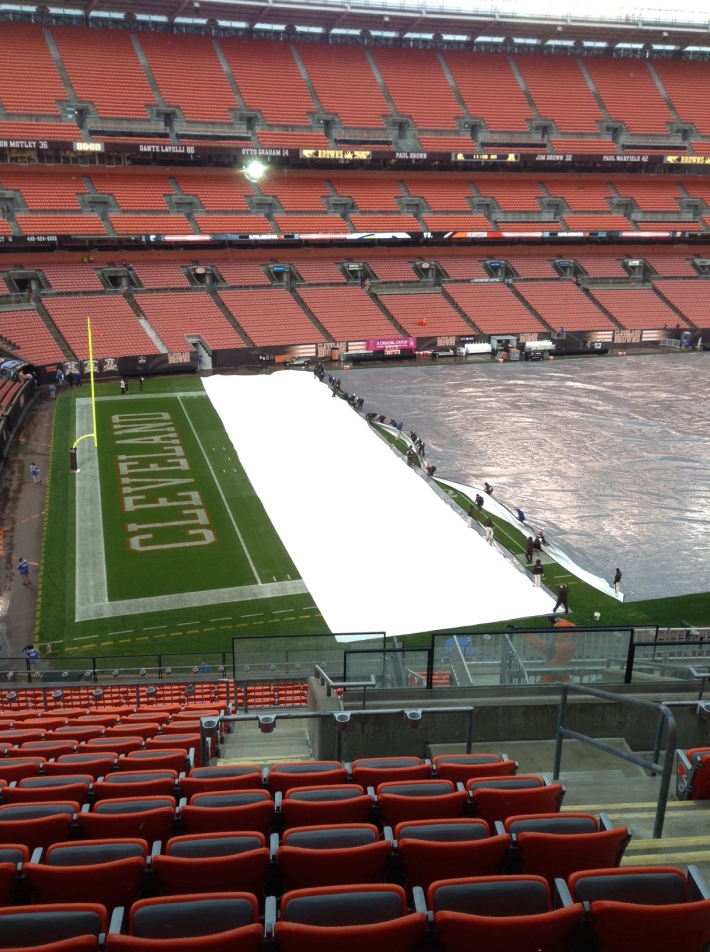 The Cleveland … Another loss. The season started to slip away. Coincidentally, this is where Norv Turner will probably coach in 2013.

Snuck in some Halloween fun with Eric Weddle for one of my “Overtime With Annie” segments.

BREAKING NEWS: Philip Rivers has a mustache! And he led the Chargers to a win with it that weekend. Sure, it was against the Chiefs. But still … the mustache had to have helped. 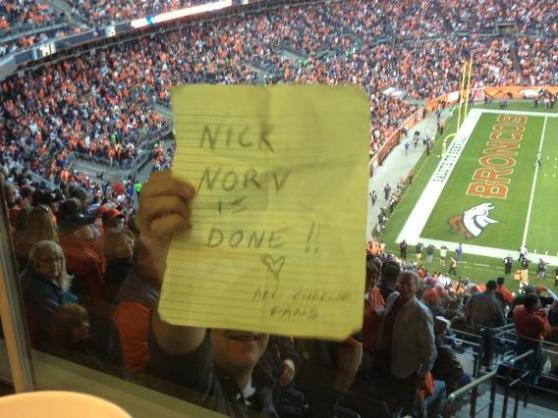 The losses brought restless fans (again), as evidenced by one who came up to the press box in Denver and held this up for Nick Canepa when San Diego lost another close one to the Broncos. 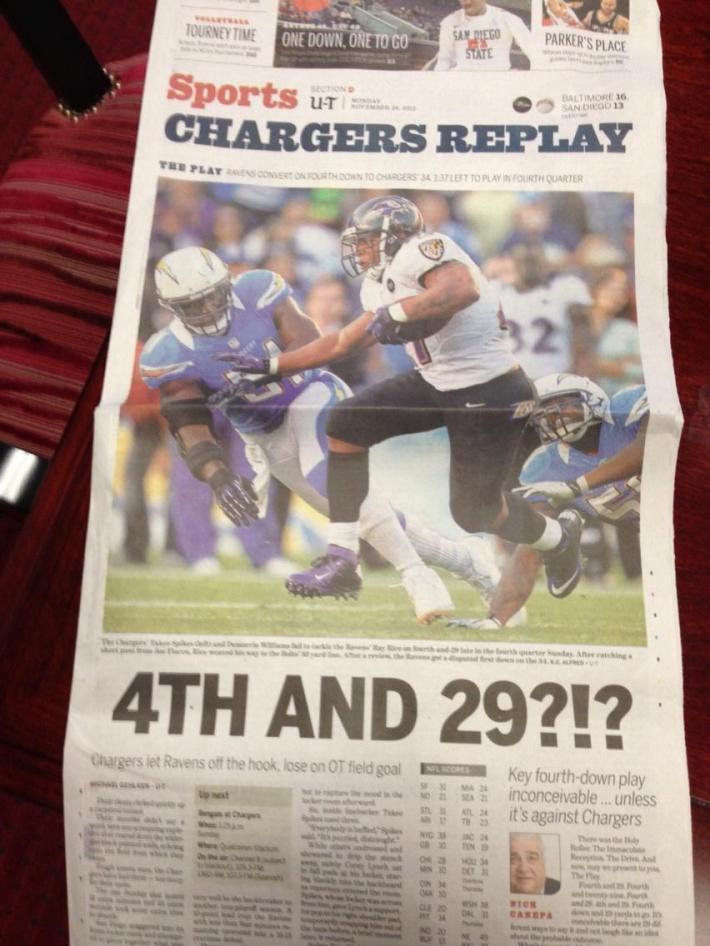 The team in Times Square for the Chargers-Jets game. Can’t tell you what the laughs are like when the three of us are in adventure mode. I almost pee my pants, repeatedly. 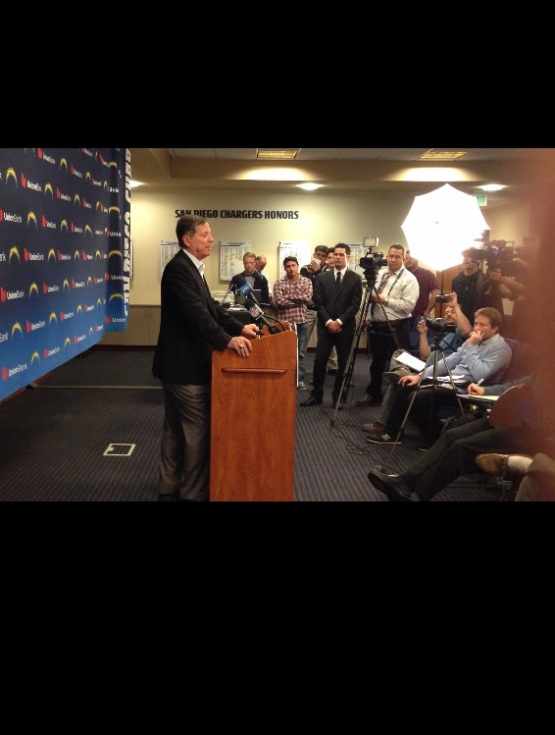 The end of one era …

And the beginning of another.