The NFL Combine is madness. It is not for the weary.

As media, you basically get there early with a hundred other media peeps, fight for a spot with a decent outlet for your laptop, get some coffee, complain about something or other, then laugh about how times have changed. Then it’s a whole day of hustle, baby. 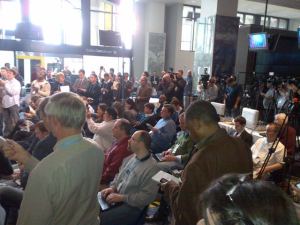 Because the NFL doesn’t provide media with times or podiums for the player pressers, it’s a lot of scrambling. A player comes into the media room and all the reporters and TV people crowd around, frantically fighting for space for their tripod or proximity to ask a question. Then another player comes in at another podium, and everyone scrambles to get over to him.

Then there might be two hours when you do NOTHING.

And then another five when you don’t sit down.

At the Combine, you have to cut your losses. You’re not going to get everyone. There will undoubtedly be two or three players talking to media at same time, and you’re gonna have to pick one. There will definitely be other media trying to sneak a player away from you to do an interview before the NFL Security People whisk him away. It’s a dog-eat-dog world around here.