The Chargers are headed to Denver.

For the first time since 2009, they made the playoffs. That was jaw-dropping enough after a rough start to the season. 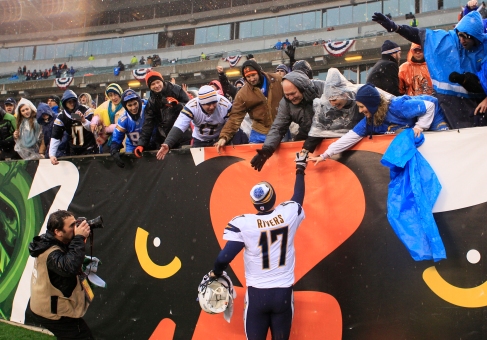 I watched a lot of TV this week and read many, many stories and I can tell you … NO ONE gave the Chargers a chance. National media counted them out time and time again. It’s understandable — the Chargers were inconsistent throughout the season, and although they won four straight to get to the playoffs, the final match-up against the Chiefs was NOT their best football.

The old adage is true, though — It’s not how you get to the playoffs, it’s what you do when you’re there. And the Chargers delivered against the Bengals, winning 27-10 at Paul Brown Stadium in Cincinnati, silencing the critics who had said they didn’t deserve to be in the playoffs.

Chargers defensive coordinator John Pagano told me last week that they were “playing with house money,” that players were loose and excited and happy for the opportunity. Young guys  like Manti Te’o and Keenan Allen said they just had to settle in and not let the game get too big.

The “underdog” status is one the Chargers are familiar with, and one they step up to at critical times.

Honestly, it was fun at Chargers Park this week. It was like a whole new season had unfolded. The past was gone and with it, a huge sigh of relief. All that mattered now was moving forward.

The Chargers head to Denver next Sunday for what will be a great divisional match-up against the Broncos.